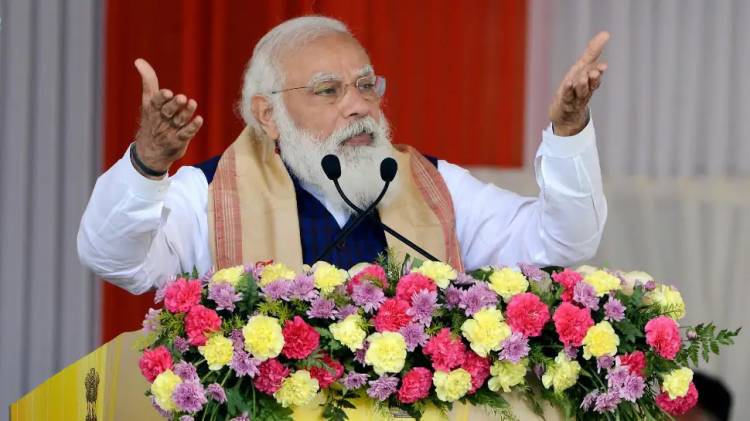 Prime Minister Modi is on a two-day visit to Gujarat, his home state. He held the roadshow from the Ahmedabad airport to the Gujarat BJP headquarters.

He will also hold meetings with party leaders and later address over one lakh village, taluka and district panchayat members in Ahmedabad. On Saturday, PM Modi is scheduled to participate in the convocation of Rashtriya Raksha University and inaugurate 'Khel Mahakumbh', a mega sporting event.

It is notable that the term of the Gujarat assembly ends on January 8 next year, and the state is expected to go to the polls this December.

Besides Gujarat, elections are also due in Himachal Pradesh. The Congress had sprung a surprise by defeating the Bharatiya Janta Party (BJP) in three assembly bypolls in Himachal Pradesh in October last year. The BJP had also lost the bye-election to the Mandi Lok Sabha seat in the hill-state.

Elections are also due in Meghalaya, Nagaland and Tripura early next year where the BJP or its alliance partners are in power.

Earlier on Thursday, BJP became the only party in over 30 years to get re-elected for a second term in Uttar Pradesh and also retained Uttarakhand, Manipur and Goa. The saffron party increased its vote share in almost all the states that went to polls including a marginal rise in Punjab.

He hailed the victories as an 'emphatic endorsement of BJP's pro-poor and proactive governance' and a 'vote for political stability'.

Prime Minister Narendra Modi said that such a grand and decisive victory for the party is a guarantee for India's bright future.

"In all the five states that went to the polls, our Party Karyakartas worked tirelessly among the people. They spoke about our good governance agenda and highlighted our pro-people efforts," he said.

The Prime Minister also referred to the next Lok Sabha polls, scheduled for 2024, and said that he hopes that political pundits will note that his party's win in the four states has also made clear the verdict for the next general election as they had linked its win in 2019 to its sweep of the Uttar Pradesh elections in 2017.

He hailed the BJP's "jeet ka chauka" (a boundary of wins) in distant states like Goa and Manipur besides Uttar Pradesh and Uttarakhand and said that the results have signalled that the sun will set on the dynastic politics in the country one day.

"People have blessed us from all directions", the prime minister told jubilant BJP workers.

He also hit out at opposition parties without directly naming them for trying to save the corrupt following action of institutions acting independently against them and expressed concern that critics have invoked caste, religion and region in their efforts to impede the probe.

"People should shun such voices", he said and asserted that his government is not only expected to work with integrity but also act against those who have been involved in corruption.

He said he is not against any individual or any particular family, but his concern is about democracy.

The Prime Minister also slammed rivals for augmenting fear among Indian students stranded in war-hit Ukraine and their families, and accused them of using regionalism to target "Operation Ganga", launched by his government to evacuate students, most of whom have been brought home.

"The BJP's win in the four states where it was in power augurs well for the country in its 75th year of independence and shows people's faith in the party's policies and its vision for the country for the next 25 years leading to the nation's centenary year of freedom," he said.

"Earlier, people could not reach governments for basic amenities such as electricity, gas and water. Now we are delivering the poor their rights," he said and asserted that he will not rest until the poor get their due.

PM Modi also lauded BJP workers for ensuring an early Holi by making the party victorious in four states and said that its vote share has increased in Manipur, Uttar Pradesh and Goa even though it was in power in the states.

"All exit polls were proven incorrect in Goa, and the people of Goa have given the BJP the chance to serve them for the third consecutive time," he said.

He also hit out at those who believe that caste rules politics in Uttar Pradesh and asserted that the BJP's straight four wins since 2014, two Lok Sabha and assembly polls each, has highlighted that people have voted for development and good governance.

People's vote for stability in the polls shows that democracy flows through their veins, he said.

"It is a day of zest and festivities and this enthusiasm is for India's democracy," PM Modi expressed.

He also praised young voters and women voters as well, saying they have played a crucial role in these elections. "They have blessed us - we've won splendidly in areas where women voters have dominated. Our Nari Shakti has been our partners in this victory," he said.

In Uttarakhand, the BJP clinched 47 seats, 11 more than the magic figure of 36, and is now all set to form a second successive government, the first in the state's 21-year history.

The saffron party won a simple majority in insurgency-hit Manipur, where it bagged 32 seats, having won 37.83 per cent votes.

In Goa, BJP overcame anti-incumbency and emerged as the single largest party by winning 20 seats, just one shy of the halfway mark, and quickly enlisted the support of regional outfit MGP, which won two seats, and three Independent MLAs to form its government for a third consecutive term in the state.