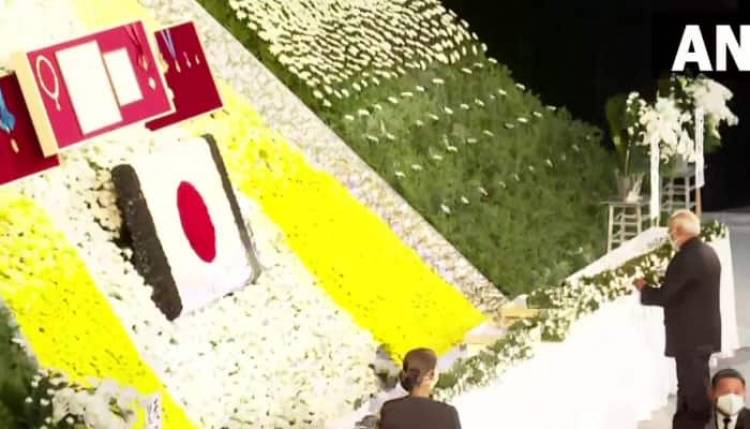 This visit of Prime Minister Narendra Modi to Japan comes after PM Fumio Kishida`s visit to India for the India-Japan Summit meeting in March, and PM Modi`s visit to Japan for the Quad Leaders` Summit in May this year.

The state funeral began with Prime Minister Fumio Kishida receiving the ashes, which appear to be contained in a ceremonial box.He then formally handed it to military officers who placed the box in the centre of the altar, set up at the front of the room. The Nippon Budokan Hall also played the videos of Abe featuring his key moments in a tribute to the assassinated leader.

It also included the time when Abe met Prime Minister Modi among many pictures of Abe with other world leaders at global summits and addressing the United Nations.

The video tribute focused on Abe`s standing as a world leader and his concerted efforts to maintain good relationships with foreign countries.

Shinzo Abe is credited with revitalising the key Trans-Pacific Partnership after the US withdrew. Notably, Shinzo Abe has been considered as one of the most important forces behind the "Quad" strategic partnership - an alliance between India, Japan, the US and Australia.

Meanwhile, up to 1,000 soldiers will perform ceremonial duties, with a military honour guard firing 19 blank rounds from a cannon to salute the former PM.A massive security cordon has been thrown around the Budokan arena - as dozens of VIPs and dignitaries in long motorcades arrive for the ceremony.

The 67-year-old politician, Japan`s longest-serving PM, was gunned down at an election rally on July 8th during a speech in Japan`s Nara city. Tetsuya Yamagami, 41, approached the politician from behind and fired two shots from a distance of about 10 meters (33 feet).

The attacker reportedly plotted the assassination of the 67-year-old former head of government for nearly a year.Abe, Japan`s longest-serving Prime Minister, stepped down in 2020 citing health reasons. He was Prime Minister of Japan twice, from 2006-07 and again from 2012-20. He was succeeded by Yoshihide Suga and later by Fumio Kishida.

Prime Minister Narendra Modi held a bilateral meeting with his Japanese counterpart Fumio Kishida on Tuesday and conveyed his deepest condolences on the demise of former Prime Minister Shinzo Abe. Prime Minister Modi, who landed in Japan on Tuesday morning to attend Abe`s state funeral, noted the contributions of the late Japanese PM in strengthening the India-Japan partnership and conceptualizing the vision of a free, open and inclusive Indo-Pacific region.

"The two leaders had a productive exchange of views on further deepening bilateral relations. They also discussed a number of regional and global issues," the Ministry of External Affairs (MEA) said in a statement. Both leaders renewed their commitment to further strengthening the India-Japan Special Strategic and Global Partnership, and working together in the region and other international groupings.

PM Modi arrived in Japan today amid heightened security measures in the country as dozens of foreign dignitaries are slated to attend the state funeral of former PM Abe who was assassinated in July.

This visit of PM Modi to Japan comes after Kishida`s visit to India for the India-Japan Summit meeting in March, and PM Modi`s visit to Japan for the Quad Leaders` Summit in May this year. These meetings underscored the two leaders` commitment to deepening India-Japan ties, particularly in shaping a post-pandemic regional and global order. This year marks the 70th anniversary of the India-Japan diplomatic relationship.

Saraswati Puja 2020: How you can celebrate the day