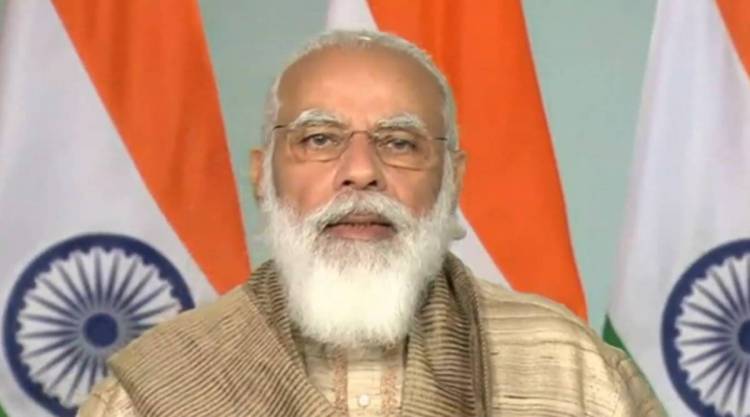 ‘Women in the country must be given the respect people give to Goddess Durga’: PM Modi

PM Modi shared his puja greetings in Bengali and appealed to the people to adhere to social distancing norms and wear face masks while taking part in the festivities.

Prime Minister Narendra Modi on Thursday virtually addressed the people of West Bengal on the occasion of Durga Puja and asserted that the Centre’s vision of Atmanirbhar Bharat Abhiyan (self-reliant India) would be strengthened from Bengal.

Beginning his address, PM Modi shared his puja greetings in Bengali and appealed to the people to adhere to social distancing norms and wear face masks while taking part in the festivities. PM Modi also spoke about women empowerment and said women in the country must be given the respect people give to Goddess Durga.

“In the 21st century, our vision of Atmanirbhar Bharat, ‘self- reliant India’, will strengthen from the land of Bengal. We have to take Bengal’s culture, pride, progress to newer heights. We are ensuring a speedy development for the people of Bengal through various schemes. We are doing everything to lessen the problems of people of Bengal and improve their lifestyle. We have adopted the vision of Purbaday to develop Eastern India. West Bengal has to play an important role to make our vision a success,” the PM said in his over 20-minute address.

The event was held at Eastern Zonal Cultural Centre (EZCC) in Salt Lake, where a Durga Puja is organised by the BJP. Party leaders Kailash Vijayvargiya, Mukul Roy and Union Minister Babul Supriyo were present at the event. The address was preceded by cultural programmes and a beautiful rendition of a Rabindranath Tagore’s song by Supriyo. 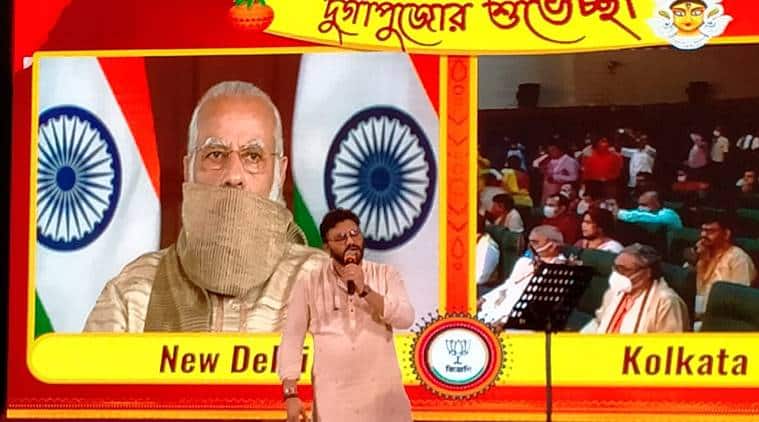 Babul Supriyo singing at the event

Noting that Goddess Durga was worshipped as a symbol of ‘Shakti’ (strength), Modi said his government was
consistently working for the empowerment of women.

“From opening Jan Dhan accounts for 22 crore women, giving soft loans to them under the Mudra Yojana, to launching Beti Bachao-Beti Padhao initiative, granting permanent commission to women in the armed forces and extending maternity leave from 12 to 26 weeks, we have taken a number of steps for their empowerment,” he said.

PM Modi’s remark comes in the backdrop of a string of incidents of rape and murder of women, including the
Hathras incident that triggered national outrage against the Uttar Pradesh government.

The prime minister said though Durga Puja this year was being celebrated on a limited scale due to the Covid-19
pandemic, the “enthusiasm is still unlimited”. “Bengal’s Pujo gives India a new colour. We are celebrating Durga Puja in times of COVID-19, all devotees have shown exemplary restrain. The number of people might be less but the grandeur and devotion are the same. The happiness and joy are still boundless. This is the real Bengal. There is such power in the devotion there, that it seems that I am not in Delhi but today I am present among you all in Bengal,” Modi said.

The prime minister also paid tribute to the icons of Bengal and said that the state had always made the country proud. “Whenever the need was felt in India’s history, Bengal has always led the way for India and shown the path. If I continue to take names of such Bengalis, we will come to the end of the day, but the names shall continue,” he said.

On Wednesday, PM Modi wished people via Twitter in Bengali. He described Durga Puja as an auspicious festival that signifies the triumph of good over evil, and in a subsequent tweet wrote that he would wish “brothers and sisters” today. “Durga Puja is an auspicious occasion, which celebrates the victory of good over evil. We pray to Maa Durga to bless us with strength, happiness, and good health,” he tweeted.

The address, which comes ahead of Bihar polls, was live-streamed in all the 294 Assembly constituencies of the state.

West Bengal is scheduled to hold the Assembly polls in the first half of the next year. The BJP has emerged as the main challenger to the ruling Trinamool Congress (TMC) and has been exuding confidence that it will end Chief Minister Mamata Banerjee’s 10-year-old reign in the state. The saffron party had won 18 seats in West Bengal against the TMC’s 22 in last year’s Lok Sabha polls and trailed the ruling party in terms of vote share by only three per cent.