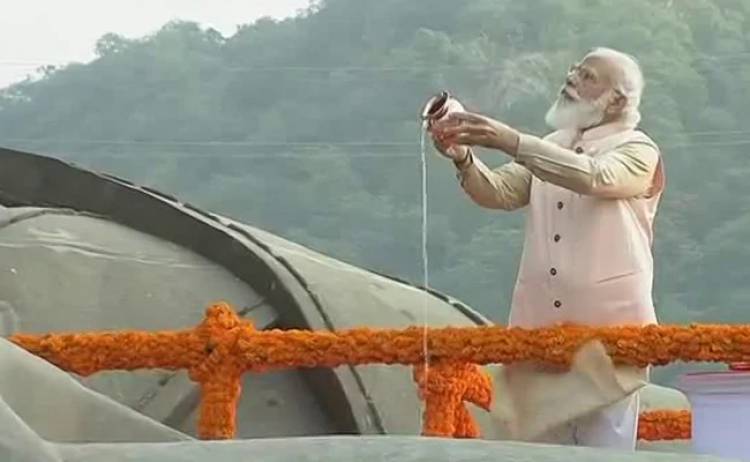 PM Modi was speaking at the Statue of Unity in Kevadia, Gujarat on Rashtriya Ekta Diwas, the birth anniversary of Sardar Vallabhbhai Patel.

Prime Minister Narendra Modi today hit out at opposition parties for their stand on the Pulwama attack last year, saying the Pakistan minister's revelations earlier this week in that country's parliament had exposed the opposition's real face.

"Today when I was watching the parade of officers, an image emerged in my mind... this image was of Pulwama attack. The country can never forget that when India was mourning the death of its sons... some people were not a part of that grief. They were looking for selfish gain in the Pulwama attack".

He said the country can never forget what sort of comments were made at that time, adding that when the attack took place, politics of selfishness and ego peak.

"In the past few days, news has emerged from the neighbouring country...The way they admitted to the attack in their parliament, it has revealed the true face (of those denying the attack). The new lows they touched for political interest...the politics after Pulwama attack is a huge example of that," he said.

"We have to always remember that the country's interests are foremost. When we will work for everyone's interests, only then the country will progress," he said.

He was talking at the Statue of Unity in Kevadia, Gujarat, to mark the 145th birth anniversary of Sardar Vallabhbhai Patel, known as Rashtriya Ekta Diwas.

In February this year, on the first anniversary of the attack, Congress leader Rahul Gandhi had targeted the BJP, holding the ruling party accountable for "security lapses" and asking 'who benefitted the most from the attack?" Mr Gandhi also wanted to know the outcome of an inquiry into the attack.

The Pulwama attack which took place weeks before last year's Lok Sabha election, and the ensuing air strikes by the Indian Air Force, triggered political sparring over a narrative built by the BJP around a tough policy against terror that the party repeatedly raised during the poll campaign.

On Thursday Pakistan minister Fawad Chaudhury had said: "Humne Hindustan ko ghus ke maara (We hit India in their home)". He later claimed to NDTV that his statement had been "misinterpreted". "Pakistan doesn't allow any terrorism, I was misinterpreted," he said.

A day later, Union Minister Prakash Javadekar demanded that the Congress "apologise to the country" for "conspiracy theories" and remarks about the incident.

Meanwhile, on the second leg of his two-day visit to his home state today, PM Modi is scheduled to participate in a number of other public functions in Gujarat.

Later in the morning, the Prime Minister was set to virtually address Civil Services Probationers. Following this, he was to inaugurate the seaplane service from Kevadia to the Sabarmati Riverfront and back.