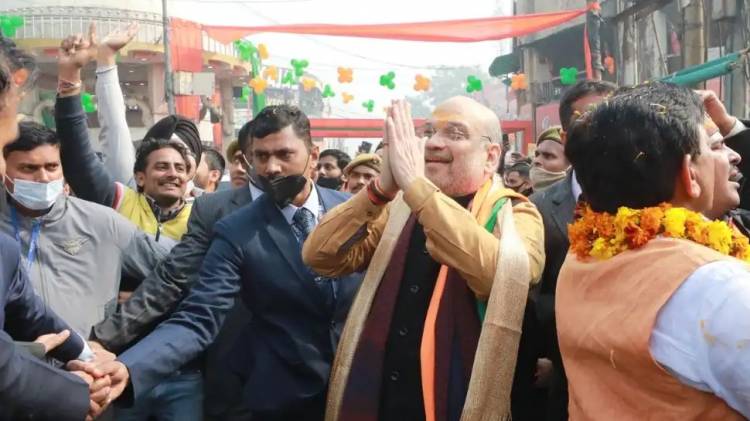 New Delhi: With the commencement of polling for the first phase of elections in Uttar Pradesh, Union Home Minister Amit Shah on Thursday (February 10) urged upon the people to cast their votes in maximum numbers to help elect a government, which can provide security, well being and good governance along with development in the state.

"Today is the first phase of polling in Uttar Pradesh. I appeal to all the brothers and sisters of this phase of polling to vote in maximum numbers to elect a government that will give security, respect and good governance along with development in the state. Your one vote is the basis of the bright future of Uttar Pradesh," said Shah in a tweet on Thursday morning.

Voting for the first phase of the Uttar Pradesh elections on 58 assembly seats covering 11 districts of the state began on Thursday at 7 am. The voting will conclude at 6 pm today. The first phase will cover the 'Jat-dominant belt' of the western part of the state. The districts going to the polls on Thursday include Mathura, Muzaffarnagar, Meerut, Ghaziabad, Bulandshahar, Hapur, Shamli, Baghpat, Aligarh, Agra and Gautam Buddha Nagar. As many as 623 candidates are in the fray in the first phase of the Assembly polls while nearly 2.27 crore voters will decide the fate of these candidates. Nearly 50,000 paramilitary personnel from 412 companies of central paramilitary forces have been deployed at different locations to maintain law and order as the election campaign for the first phase of assembly polls in western Uttar Pradesh ended on Tuesday evening.

The police have sealed the borders of the State and strict vigilance is underway to maintain peace in 58 assembly constituencies which will go to the polls today. The 403-member Uttar Pradesh Assembly is scheduled to go to the polls in seven phases on February 10, 14, 20, 23, 27, March 3, and 7. The counting of votes will take place on March 10.