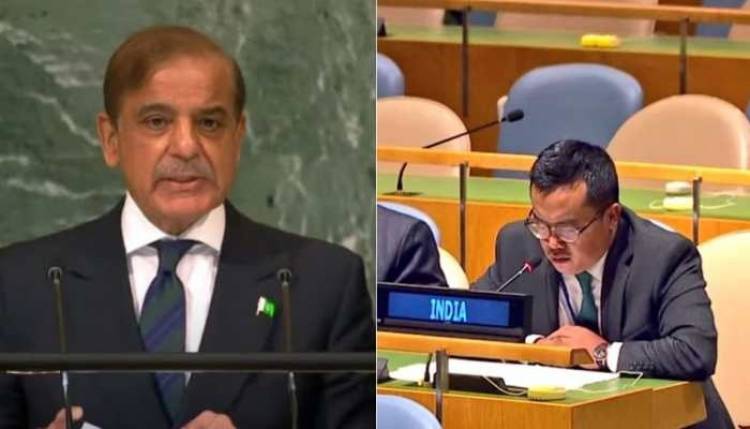 "It is regrettable that the Prime Minister of Pakistan has chosen the platform of this august assembly to make false accusations against India," Indian diplomat Mijito Vinito at UNGA.

New Delhi: Indian diplomat Mijito Vinito has slammed Pakistani Prime Minister Shehbaz Sharif after his address at the United Nations General Assembly raking Kashmir and making anti-India remarks. In his right to reply, Mijito Vinito, First Secretary, Indian Mission to United Nations said, "It is regrettable that the Prime Minister of Pakistan has chosen the platform of this august assembly to make false accusations against India", adding, "He has done so to obfuscate misdeeds in his own country and to justify actions against India that the world considers unacceptable."

Pakistan PM Shehbaz had addressed the general assembly and mentioned Kashmir more than 10 times and India more than 9 times in his address. Pakistani PMs in the past have used the famous green podium during the annual general assembly to rake up Kashmir, something that hasn't come as a surprise this time as well.

Indian Diplomat Mijito raising the issue of Pakistan's support to terror said,"a polity that claims it seeks peace with its neighbours would never sponsor cross-border terrorism". He pointed how Islamabad continues to "shelter planners of the horrific Mumbai terrorist attack, disclosing their existence only under pressure from the international community". Terror remains a key concern for New Delhi when it comes to Pakistan and a policy has stated that no talks will happen unless Islamabad takes action against terrorism.

The First Secretary also highlighted the situation of minorities in the country, saying, "When young women in the thousands from the minority community are abducted as an SOP, what can we conclude about the underlying mindset?". Hindus, Christians, Sikhs, and Ahmadiyya continue to face prosecution and discrimination in the country, which has been well documented.

The Indian diplomat concluded by saying that the "desire for peace, security, and progress in the Indian subcontinent is real" but "that will surely happen when cross border terrorism ceases, when governments come clean with the international community and their own people, when minorities are not persecuted and, not least, when we recognize these realities before this Assembly."

In 2020, Mijito had walked out of UNGA hall after then Pak PM Imran khan started making anti-India remarks.

US Election 2020: Joe Biden on brink of White House as he wins Michigan,...

Celebration of 75 years of India's Independence at US Capitol will become...