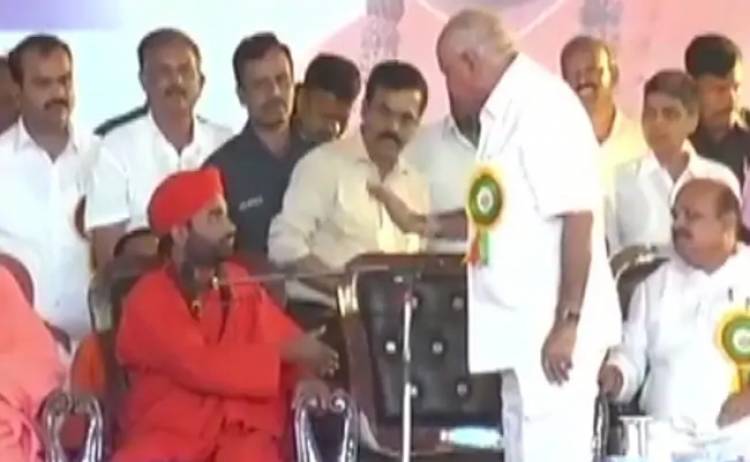 "Not Here To Listen To All This": BS Yediyurappa's Fury At Seer On Stage

Murugesh Nirani, a legislator from Bilgi, belongs to the powerful Lingayat community, and is counted among Mr Yediyurappa's rivals within the BJP as a face of the community.

Losing his temper at a public event on Tuesday, Karnataka Chief Minister BS Yediyurappa got up and almost walked off the stage until he was persuaded to stay by the Lingayat seer, Vachanananda Swami. What rattled the Chief Minister was the seer's pitch for a cabinet post for a BJP MLA during a religious rally.

"CM, you are next to me. I want to tell you, don't ignore Murugesh Nirani. If you don't take care of him now, you will lose the support of the whole community," said Vachanananda Swami at the Lingayat rally in Davangere.

Mr Yediyurappa, grim-faced, immediately rose to his feet and fumed: "I am not here to listen to all this...I cannot work as per your demands. I am leaving."

He touched the Seer's feet and made to leave but Vachananda Swami urged him to stay. The Chief Minister finally returned to his seat. Karnataka Home Minister Basavaraj Bommai and other BJP leaders were also on the stage.

Later, Mr Yediyurappa, while addressing the rally, offered to resign. He stressed that he was compelled to "take care of" the 17 rebel MLAs who had left their parties to help make him Chief Minister. "I request the seer, please understand my situation. 17 MLAs resigned as MLAs and ministers. Yediyurappa wouldn't be Chief Minister if not for them. It's because of their sacrifice and all your blessings that I've become CM of the state. Let seers give suggestions, I'll come and discuss in person. If you don't need, I'm willing to resign tomorrow. I'm not stuck to my chair."

Murugesh Nirani, a legislator from Bilgi, belongs to the powerful Lingayat community, and is counted among Mr Yediyurappa's rivals within the BJP as a face of the community. The Lingayats account for a chunk of BJP votes in Karnataka.

Mr Yediyurappa is expected to include more ministers in his cabinet later this month.

In the 225-member Karnataka assembly, the cabinet can have not more than 34 ministers. Mr Yediyurappa has saved 16 spots for the MLAs whose defection brought down the Janata Dal Secular-Congress coalition government and helped the BJP to take power in Karnataka last year. Most of them won the by-election.

To accommodate them, the Chief Minister may have to drop half a dozen ministers, which has generated resentment within the ranks. His 17-member cabinet already has three deputy chief ministers -- CN CN Ashwath Narayan, Laxman S Savadi and Govind M Karjol.