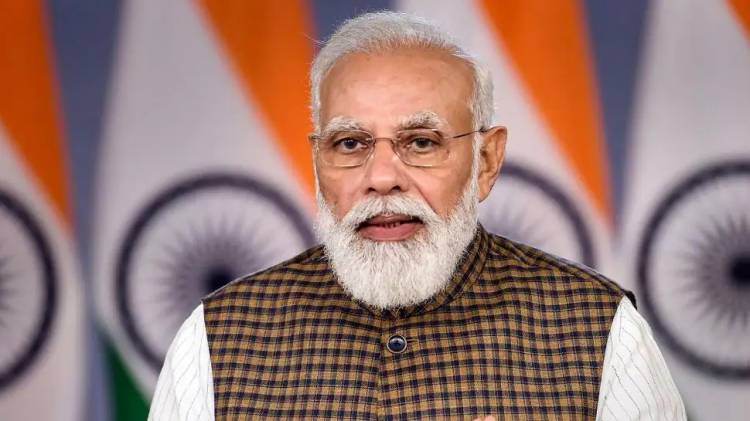 Lord Buddha's teachings are inspiration for India to be self-reliant: PM Narendra Modi

New Delhi: Prime Minister Narendra Modi on Wednesday (October 20) quoted Lord Buddha's teaching, 'Appa Deepo Bhava', meaning 'be your own light' and said it is the motivation for India to become self-reliant. The Prime Minister's remarks came during his address at an event organised to mark Abhidhamma Day at the Mahaparinirvana Temple in Uttar Pradesh's Kushinagar today.

"Lord Buddha said 'Appa Deepo Bhava', meaning 'be your own light'. When a person is self-illuminated, he lights up the world as well. This is the motivation for India to become self-reliant. This is the inspiration that gives us the strength to participate in the progress of every country in the world," stated PM Modi. He also remarked that Lord Buddha`s teachings are being taken forward by India in the mantra of 'Sabka Saath, Sabka Vikas, Sabka Vishwas aur Sabka Prayas.'

Addressing the event, the Prime Minister noted the auspicious occasion of Ashwin Poornima and the presence of holy relics of Lord Buddha. Welcoming the delegation of Sri Lanka, the Prime Minister recalled the connections between India and Sri Lanka and talked about emperor Ashoka's son Mahendra and daughter Sanghamitra taking the message of Buddhism to Sri Lanka. He added that it is believed that on this day, 'Arhat Mahinda' came back and told his father that Sri Lanka had accepted the Buddha`s message with so much energy. "This news had increased the belief that Buddha's message is for the whole world, Buddha's Dharma (teachings) is for humanity," the Prime Minister said.

Lauding the role of the International Buddhist Confederation in spreading the message of Lord Buddha, the Prime Minister remembered Shakti Sinha for his contribution as DG of the International Buddhist Confederation. Sinha passed away recently.The Prime Minister remarked that today is another auspicious occasion - Lord Buddha`s coming back to earth from Tushita heaven. "That is why, on Ashwin Purnima today, the monks also complete their three-month 'Varshavas'. Today I too have had the privilege of 'chiver daan' to the Sangh monks after the Varshavas," PM Modi said.

Modi also said that Lord Buddha is universal because he said to start from within and Buddha's Buddhatva is a sense of ultimate responsibility. He added that today when the world talks about environmental protection, expresses its concern about climate change, then many questions arise with it. "But, if we adopt the message of Buddha, then instead of asking 'who will do', 'what is to be done', (we will see that a) path starts showing itself," he said. The Prime Minister said that Buddha resides in the "soul of humanity" and is connecting different cultures and countries.

"India never believed in restricting the knowledge, great messages or the thoughts of great souls. Whatever was ours was shared with the entire humanity. That is why, human values like non-violence and compassion are settled in the heart of India so naturally," he stated.

Prime Minister today visited the Mahaparinirvana temple and offered 'Archana' (prayer) and 'Chivar' to the reclining statue of Lord Buddha and also planted a Bodhi tree sapling in an event to mark Abhidhamma Day. 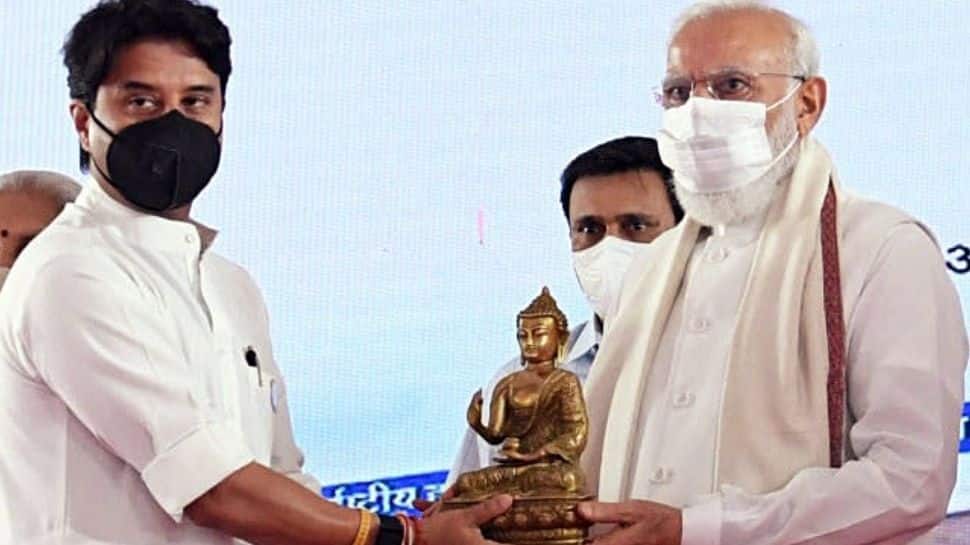 Prime Minister Narendra Modi being felicitated with a statue of Buddha by Union Minister of Civil Aviation Jyotiraditya Scindia at the inauguration of the Kushinagar International Airport (Pic: ANI)

Abhidhamma Day symbolises the end of a three-month rainy retreat - Varshavaas or Vassa - for the Buddhist Monks, during which they stay at one place in the vihara and monastery and pray. The event was also attended by eminent monks from Sri Lanka, Thailand, Myanmar, South Korea, Nepal, Bhutan and Cambodia, as well as Ambassadors of various countries. An inaugural flight from Colombo, carrying the Sri Lankan delegation of over a hundred Buddhist Monks and dignitaries including the 12-member Holy Relic entourage bringing the Holy Buddha Relics for Exposition, arrived in Uttar Pradesh's Kushinagar airport earlier today.

PM Modi said that Buddha, even today, is the inspiration of the Constitution of India, Buddha's Dharma Chakra is sitting on the tricolour of India and giving us momentum. "Even today, if someone goes to the Parliament of India, then this mantra is definitely seen - Dharma Chakra Pravartanaya," noted the Prime Minister.