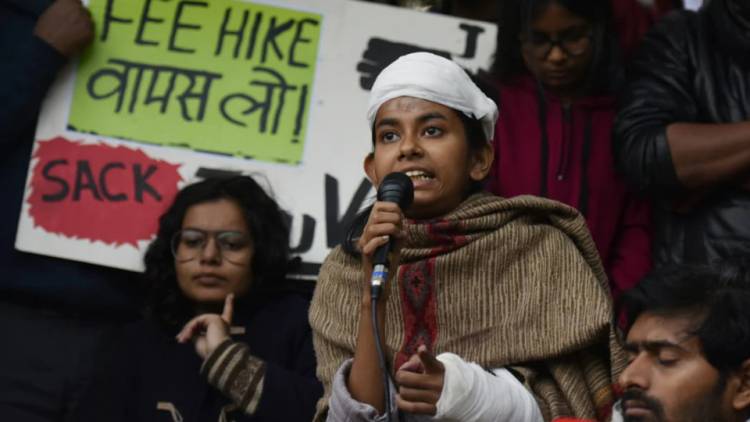 The complaint against Ghosh was filed by the JNU administration. The case against her for destroying university property was registered on Sunday morning.

The Delhi Police has filed a First Information Report (FIR) against Jawaharlal Nehru University Students’ Union (JNUSU) leader Aishe Ghosh and 19 others for allegedly destroying the varsity’s property. Ghosh and others have been accused of destroying the server room on Saturday, a day before masked men and women armed with rods and hammers went about beating students and teachers on campus.

The complaint against Ghosh was filed by the JNU administration. The case against her was registered on Sunday morning.

Ghosh was badly injured in the mob attack that took place on Sunday evening. She was hit on her head. Her face, with blood streaming down it, was all over the internet. Several students and faculty members were also hurt in the incident.

Ghosh alleged that the JNU administration colluded with the mob to “disrupt the students’ movement against the hostel fee hike”.

Ghosh also alleged that she had contacted the SHO of the nearest police station, other senior officers and the JNU security staff when she got to know about the mob entering the campus, but she got no response. Ghosh alleged that while some of the ABVP men were from JNU itself, the others had been called in.

“They first vandalised a car parked nearby before besieging us. My sister managed to escaped, but my friend and I were caught by the mob. They first struck me on my head with a rod before kicking and thrashing me. I screamed at them that they couldn’t do that, but they didn’t stop,” she said.

She also named Ashwini Mohapatra, chairperson of Centre for West Asian Studies (CWAS), and accused him of assaulting students during a protest last week, a charge denied by Mohapatra.

The Left-backed JNUSU and the RSS-affiliated Akhil Bharatiya Vidyarthi Parishad (ABVP) have blamed each other for the violence that continued for nearly two hours on Sunday.

Ghosh and other injured were admitted to the AIIMS Trauma Centre in New Delhi. They were discharged on Monday.