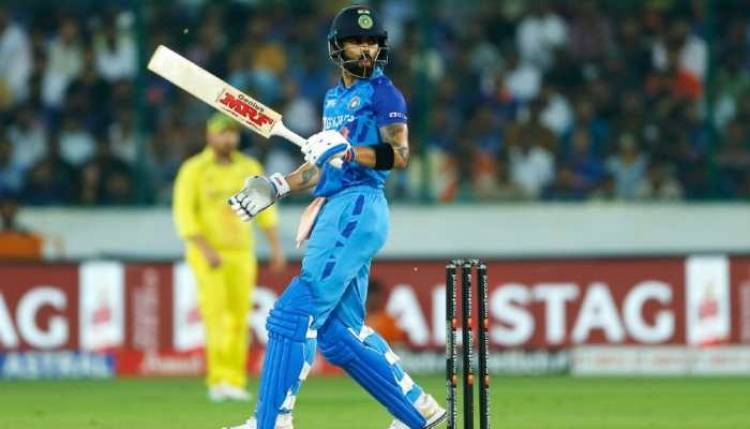 Former India captain Virat Kohli has 16,004 runs across T20I and ODI formats. These runs have come in 369 matches in white-ball cricket across 352 innings at an average of 55.95.

Former India captain Virat Kohli on Sunday (September 25) became the second player to score 16,000 runs in white-ball international cricket. Kohli reached this landmark during the third T20I against Australia in Hyderabad. In the match, the ‘Chase Master’ Kohli was in full flow, switching from attacker to anchor, from anchor to attacker at will. He struck 63 runs in 48 balls, consisting of three fours and four sixes.

Kohli is also the second-highest run-scorer in the history of white-ball cricket. The first one to score 16,000 runs in white-ball cricket is legendary cricketer Sachin Tendulkar. Tendulkar played a total of 463 ODIs, scoring 18,426 runs at an average of 44.83. 49 centuries and 96 half-centuries came from his bat, with the best score of 200 not out.

On the other hand, in the solitary T20I the Master Blaster played, he could manage only 10 runs. In all, Sachin has scored 18,436 runs in 464 white-ball matches at an average of 43.58. Coming to the third T20I against Australia, visitors Aussies posted 186/7 in their 20 overs.

Cameron Green (52 off 21 balls) helped them get to an explosive start.But following that, spinners Yuzvendra Chahal (1/22) and Axar Patel (3/33) helped the Men-in-Blue make a comeback, restricting Aussies’ run flow and leaving them struggling at 117/6 in 13.5 overs.

Then a 68-run stand between Tim David (54) and Daniel Sams (28 not out) helped the visitors reach 186/7 in their 20 overs. Axar was India’s star with the ball and continued his good run in the series. Chahal, Bhuvneshwar Kumar and Harshal Patel also got one wicket each. Chasing 187, Team India lost openers KL Rahul (1) and skipper Rohit Sharma (17) quickly, leaving them struggling at 2/30.

Then Virat Kohli and Suryakumar Yadav stitched a quickfire 104-run stand in 62 balls, with Yadav smashing Aussies all over the park and Virat anchoring the innings after scoring some quick runs in his first 20 balls. Yadav’s dismissal for 69 off 36 to Josh Hazlewood broke the stand. Following that, Virat brought up his half-century and looked to finish off the game, but was caught by skipper Aaron Finch on a Sams delivery for a well-made 63 off 48.

Pakistan will tour India for 2023 ODI World Cup, I can give it in writing,...

Petrol price at all-time high in Delhi after fresh hike. Check rates in...