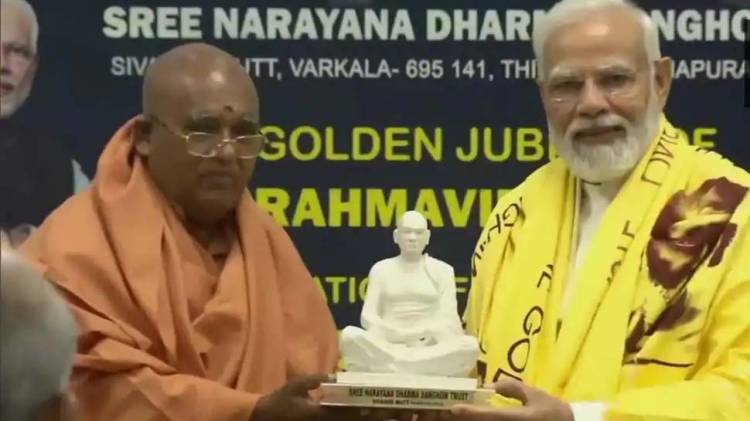 If people follow Sree Narayana Guru's teachings of 'one caste, one religion, one God', no one can divide country: PM Modi

PM Narendra Modi attended the inaugural ceremony of year-long joint celebrations of the 90th anniversary of the Sivagiri pilgrimage and the Golden Jubilee of Brahma Vidyalaya today.

Addressing the inaugural ceremony of year-long joint celebrations of the 90th anniversary of the Sivagiri pilgrimage and the Golden Jubilee of Brahma Vidyalaya, the PM said the social reformer refined the religion and changed it according to the times.

"If people follow Sree Narayana Guru's teachings and message of 'one caste, one religion and one God', then no force in the world would be able to divide the country," PM Modi said, as per PTI, adding that the guru's message showed the way towards an 'Atma Nirbhar Bharat'.

Minister of State for External Affairs and Parliamentary Affairs V Muraleedharan and Union Minister of State for Entrepreneurship, Skill Development, Electronics and Technology Rajeev Chandrasekhar also participated in the event. The event, organised by the Sree Narayana Dharma Sanghom Trust in Delhi, was held at the official residence of the Prime Minister of India.

PM Narendra Modi participated in the inaugural ceremony of the joint celebrations of the 90th anniversary of the Sivagiri Pilgrimage and Golden Jubilee of Brahma Vidhyalaya via video conferencing from Delhi. pic.twitter.com/073oz5AFOi

The Sivagiri pilgrimage and Brahma Vidhyalaya began under the guidance of great social reformer Narayana Guru. Sivagiri pilgrimage, which began in 1933, is held three days every year from December 30 to January 1 at Sivagiri, Thiruvananthapuram in Kerala. Every year, lakhs of devotees from around the world visit Sivagiri to participate in the pilgrimage.

"According to Narayana Guru, the aim of the pilgrimage should be the creation of comprehensive knowledge among the people and the pilgrimage should help in their overall development and prosperity. The pilgrimage, therefore, focuses on eight subjects viz education, cleanliness, piety, handicrafts, trade and commerce, agriculture, science & technology and organised endeavour," the Prime Minister`s Office (PMO) said, as per IANS.

The Brahma Vidhyalaya of Sivagiri was set up to realise the vision of Narayan Guru who had envisioned a place to teach the principles of all religions with equanimity and equal respect. “Brahma Vidyalaya offers a seven-year course on Indian philosophy, including the works of Narayana Guru and scriptures of all important religions of the world," the PMO added.

Will devise strategy after taking over as Chief of Defence Staff, says...