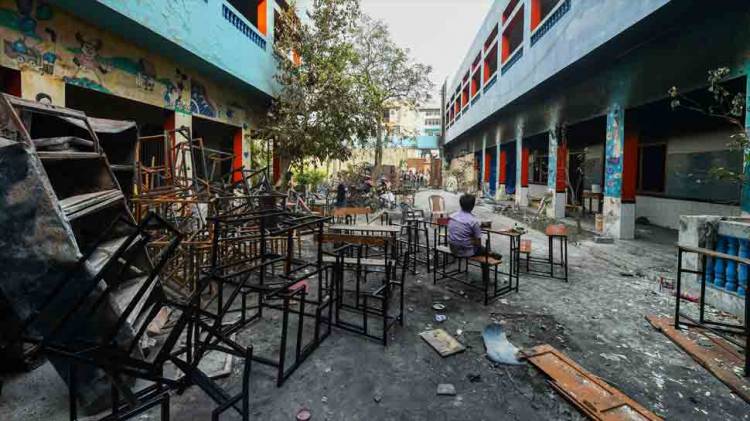 New Delhi: Taking action against rumour-mongers in south-east district, Delhi Police on Monday registered 10 cases under relevant Sections of the Indian Penal Code (IPC), and 163 cases under Section 65 of the Delhi Police Act. Three cases have also been registered under Section 107/151 of CrPc. At least 50 people have been arrested in connection with the case, said police.

Earlier on Monday Delhi Police Commissioner SN Shrivastava said that as many as six cases were registered and the investigation is in advanced stages in connection with rumour-mongering in the national capital on Sunday evening.

Speaking at a press conference, Shrivastava said, "Some anti-nationals and miscreants want to spread rumours to disturb peace in Delhi. We want to tell the citizens of Delhi that whenever they get unconfirmed reports of riots or any disturbance, they must verify such reports from the Central Police Control room for which we are giving an advertisement."

The Commissioner also said that the situation is peaceful now in the national capital. "I have also toured the areas of the north-east district of Delhi and found shops were opened, so normalcy is returning fast," he said.

When asked about cases registered in Delhi violence, Shrivastava said, "We have registered more than 300 cases and have made arrests too. We are ensuring to arrest those against whom we have evidence."At least 47 people have died and around 200 sustained injuries in the violence that erupted in north-east Delhi last week.

Delhi was on the edge once again after rumours of tensions in various pockets spread on Sunday evening.

The situation that is crawling towards normalcy once again became tense on Sunday night as false news and information on violence and arson did the rounds. The Delhi Police Control Room had received 1,880 notifications within just 2-3 hours on Sunday night.

After investigation, each and every information was found to be false and misleading. The fake notifications on violence were received mainly from different Delhi districts.

The highest number of rumours -- 481, was reported to the Western District Police Control Room. Southeastern, Dwarka, Outer and Rohini districts were ranked second, third, fourth and fifth respectively in getting the false news of the violence.