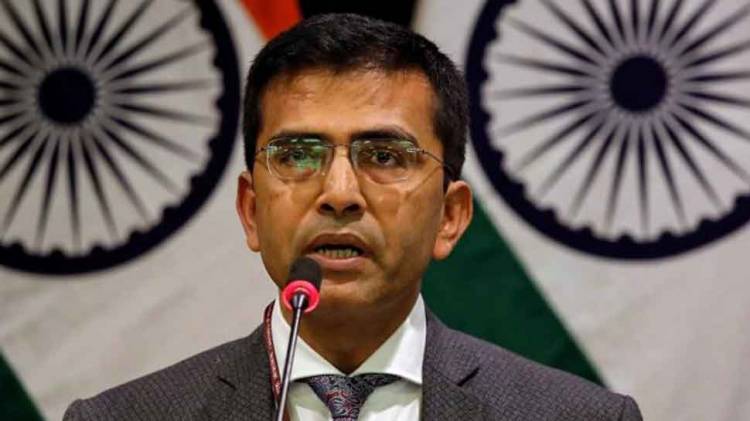 Erdogan raked up the Kashmir issue in Pakistan Parliament, vowing that Ankara will support Islamabad's stand as it is a matter of concern to both the countries

Commenting on the issue, MEA official spokesperson Raveesh Kumar said, ''We call upon the Turkish leadership to not interfere in India's internal affairs and develop a proper understanding of the facts, including the grave threat posed by terrorism emanating from Pakistan to India and the region.''

The statement from the MEA came hours after Turkey President Recep Tayyip Erdogan once again raked up the Kashmir issue in Pakistan Parliament, vowing that Ankara will support Islamabad's stand as it is a matter of concern to both the countries.

Addressing a joint session of Pakistan's Parliament, Erdogan, who arrived in the country on a two-day visit, announced that Turkey will back Pakistan in its efforts to come out of the Grey List of the Financial Action Task Force (FATF) which is meeting this week in Paris.

"I also want to emphasise that we will give support to Pakistan which is subject to political pressure in the Financial Action Task Force meetings," he said on the upcoming meeting of the anti-terror financing watchdog. Voicing his country's support to Pakistan's stand on the Kashmir issue, he said it can be resolved not through conflict or oppression but on the basis of justice and fairness.

"Our Kashmiri brothers and sisters have suffered from inconveniences for decades and these sufferings have become graver due to unilateral steps taken in recent times," Erdogan said, apparently referring to India revoking the special status of Jammu and Kashmir in August last year.

"Today, the issue of Kashmir is as close to us as it is to you (Pakistanis). Such a solution (on the basis of justice and fairness) will serve the interests of all parties concerned. Turkey will continue to stand by justice, peace and dialogue in the resolution of the Kashmir issue," the President said.

The Turkish President, in his address, likened the "struggle" of the Kashmiris with that of his country in World War I against foreign domination.

Drawing a comparison with the battle of Gallipoli which was fought in Turkey between the Allied Powers and the Ottoman Empire in which over two lakh troops were killed on the both sides, Erdogan said, "there is no difference between Gallipoli and Kashmir".

"Turkey will continue to raise its voice against the oppression," he told Pakistani lawmakers in his address to the National Assembly and Senate, which was his record fourth address to the Pakistani Parliament over the years.

In September last year, Erdogan had raised the Kashmir issue during his address at the United Nations General Assembly.

Now, you can enable/disable your bank credit/debit cards - know more