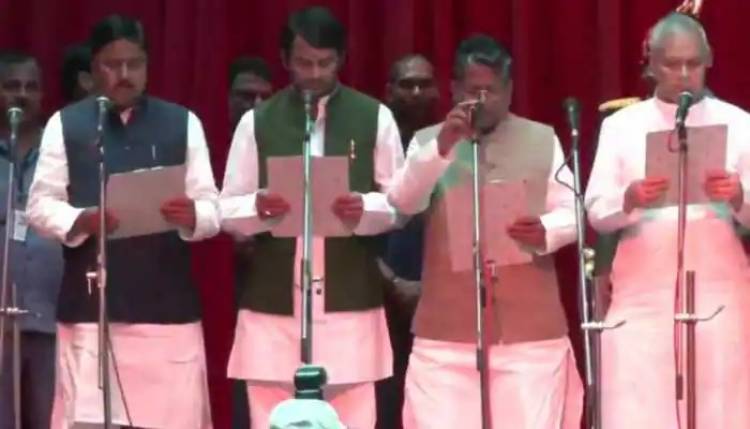 Tejashwi Yadav-led RJD, which is the largest party in the state assembly, had the lion's share of ministerial berths, followed by Nitish Kumar's JD(U).

New Delhi: The two-member Bihar Cabinet comprising Chief Minister Nitish Kumar and his deputy Tejashwi Prasad Yadav was expanded on Tuesday (August 16, 2022) with 31 members being inducted from different constituents of the 'Mahagathbandhan' including RJD chief Lalu Pratap Yadav's elder son Tej Pratap. Vijay Kumar Chaudhary, Alok Mehta, Madan Sahni, Lalit Kumar Yadav, and Leshi Singh were also among those who took the oath in the swearing-in ceremony at the Raj Bhavan in the state capital Patna.

Tejashwi Yadav's RJD, which is the largest party in the state assembly, had the lion's share of ministerial berths, followed by Nitish Kumar's JD(U).

The state cabinet, notably, can have up to 36 ministers, including the chief minister. Nitish, however, has kept a few berths vacant for future expansion.

Bihar Congress MLAs Afaque Alam and Murari Gautam took the oath in the final round of the Bihar cabinet expansion. The two leaders have been handpicked as part of the party's strategy to back a Muslim and a Dalit.

Hindustani Awam Morcha's Santosh Suman also returned as a minister. The party, founded by his father and former Bihar CM Jitan Ram Manhi, has four MLAs and it had quit the NDA expressing solidarity with Nitish Kumar.

The lone Independent Sumit Kumar Singh, whose late father Narendra Singh was an old associate of the chief minister, was also sworn in today.

BJP core committee in Bihar to meet in Delhi today

Meanwhile, the BJP's central leadership is likely to hold a meeting with the party's Bihar unit leaders in Delhi on Tuesday, days after the JD(U) parted ways with it and formed a new government in the state. The meeting will reportedly be chaired by BJP national president J P Nadda and the general secretary (organisation) BL Santhosh will also be present.

They are expected to deliberate upon the party's future course of action, and the strategy for the 2024 Lok Sabha polls.

According to the sources, Union Ministers Ashwini Choubey, Giriraj Singh, and Nityanand Rai, and the party's senior leaders Ravi Shankar Prasad and Sushil Modi - all of whom are from Bihar - may also attend the meeting

It is notable that this will be BJP's first meeting since JD(U) leader Nitish Kumar snapped ties with the saffron party on August 9 and joined hands with the RJD-led alliance.