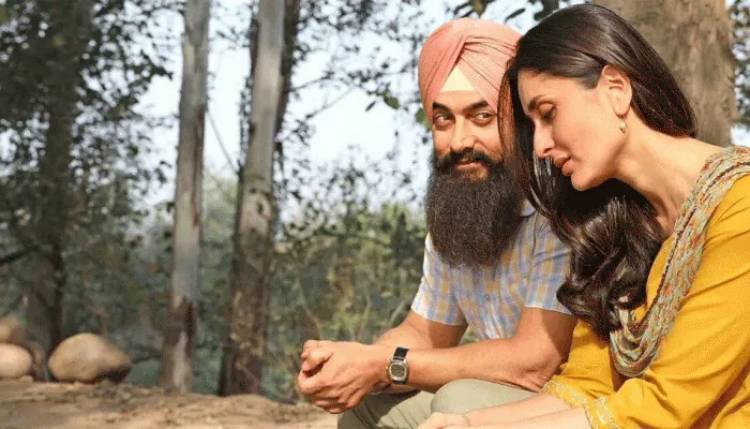 'Laal Singh Chaddha' had started on a slow note upon its release and saw an opening of Rs 11.70 crore. It was expected that the film will show growth over the weekend, which didn't happen.

NEW DELHI: Aamir Khan and Kareena Kapoor's latest release 'Laal Singh Chaddha', which has received mixed reviews from the critics and audience, continued its lukewarm response at the Box Office. The film, which completed its one-week run in theatres, failed to touch the Rs 50 crore-mark at the ticket window. As per Pinkvilla, the film collected Rs 1.55 crore on its seventh day, i.e. on August 17, taking its total collection to Rs 49.23 crore.

'Laal Singh Chaddha' had started on a slow note upon its release and saw an opening of Rs 11.70 crore. It was expected that the film will show growth over the weekend and on the extended weekend that coincided with Independence Day. However, in a huge setback to the makers, it did't happen and the film failed to pull crowds to theatres despite much appeal from the actors.

It is to be noted that Aamir Khan's last release 'Thugs Of Hindostan' (2018), which was brutally criticised by critics and audiences, for its poor script and bad screenplay, had got an opening of 50.75 crore. And it's shocking to see that 'Laal Singh Chaddha' couldn't even collect that much amount in seven days of theatrical run. For now, it looks like the lifetime collection of the movie will be around Rs. 60 crore.

Aamir's fans had pinned their hopes on the return of 'Mr. Perfectionist' to the big screens after a long gap. But it seems that all the hopes have come crashing down with the kind of response the film has received from the general audience. This film was supposed to be a successful comeback film for Aamir Khan as his previous release, 'Thugs of Hindostan', had also tanked at the box office.

'Laal Singh Chaddha' was easily one of the most awaited movies of the year and was released with much anticipation, but just to its opposite, the film, when released, was not liked by the critics or the fans, with some pointing towards Aamir's performance in the film being just the 2.0 version of PK, while some said it couldn't properly convey what it had set out to.

'Congress gets disturbed whenever Ram Mandir...': BJP leader hits back...